The role of a school in a student’s life is more than just providing a space of learning. A school also provides a network of support and it acts as a catalyst for the academic and social growth of a student. However, this is not the same case for all students because there are students who are being denied the education which they deserve. This might be evident in the case of children with special needs (CWSN). Even though CWSN transcends their situations to attain education, factors like an unfriendly school environment can be a barrier in their growth. Hence, changing the mindset of peers and teachers is very crucial for the academic and social growth of a CWSN. This will then enable CWSN to reach their full potential. Bhupendra’s story showcases how the support of peers and teachers can make a transformative impact that can be made in the life of CWSN.

“Bhupendra, a fifth standard student, whom I met in 2018, has now grown taller, smarter and more vocal. He can express himself better and can interact with other peers with less difficulty now”, says Deep Ranjani Rai (Program Director of Vibha in India). Deep recollects her first meeting with Bhupendra in 2018. She met him during a field visit to Rajasthan Mahila Kalyan Mandala (RMKM). Bhupendra had moderate mental development disability and he was just gaining some use of his legs through walking, which was little unsteady.

In 2018, RMKM ensured Bhupendra’s enrolment in a government school in Class 4 so that he does not remain deprived of education. As he was new in the class, he was aloof. He also had difficulty in engaging in conversations with his peers. 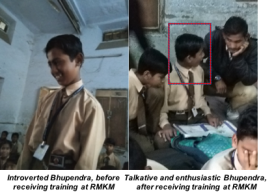 Education gave him time and place to blossom. And he started to cope and adjust to the new environment and started blossoming as a sweet little boy.

During her field visit in November 2019, Deep was delighted to see Bhupendra walk steadily, conversing and articulating words clearly. Seeing him interacting with teachers and peers during his class, anyone could understand that Bhupendra is an integral part of his class. However, this was not the case last year. RMKM plays a pivotal role in creating these transformative impacts on Bhupendra’s life. RMKM has been successful in not only providing Bhupendra with the initial home-based rehabilitation but also has given him a good shot at leading a better life by enrolling him in school. He has made steady improvement as his class teacher reports. According to his class teacher, Bhupendra is slowly catching up with his peers now. It will take time but with support from his teachers and his class fellows, all is possible.

RMKM, based in Rajasthan, is one of the leading organizations working on issues of children with special needs, at the State level and active in advocacy at the national level. It is a well-acclaimed organization with several awards for its services. RMKM works directly with children with special needs (CWSN) through their community-based rehabilitation program and programs focused on raising awareness and building capacity within the community, schools, and government, and other institutions.

RMKM has not only made an impact on the children with special needs but has brought positive changes in teachers and other stakeholders involved in the education of CWSN, as well. Teachers are now motivating and sensitizing their peers, about how to work and coordinate with the CWSN. With the motivation of teachers, CWSN is getting the peer support that it needs and is beginning to participate and learn along with their peers.

How is Vibha involved with RMKM?

Vibha’s journey with RMKM began in 2003. Vibha supports the Community based Rehabilitation (CBR) program and a segment of their outreach work in schools in parts of urban Ajmer and Pushkar.

In the Community Based Rehabilitation (CBR) Program, 304 children and young adults have been reached out to by RMKM through the support from Vibha. In 2019, 66 new children were included in this program. As soon as these children reach their development potential, they are either enrolled in a formal school or are given vocational training which is either home-based or geared towards getting them employment.

RMKM’s work has given hope for better-quality life to CWSN.  The story of Bhupendra is an epitome of hope that RMKM is instilling in young minds.

One thought on “Journey towards hope -By Asha Devi (Program Manager, Vibha)”